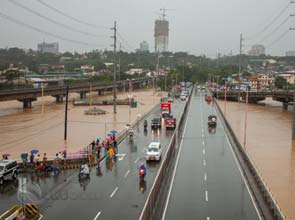 International companies investing in Asian economies will be exposed to environmental risks over the next decades, according to global risks analyst Maplecroft.

Dhaka, Bangladesh was also identified as being highly susceptible to changing temperatures and weather conditions, which are predicted to occur in the coming years.

“Extreme risk” cities may see an increase in frequency and severity of hydrological and meteorological events, according to the report.

For instance, there were major flooding events in Yangon in 2008, in Bangkok in 2011 and in Manila earlier this year.

“Such events could become both more frequent and severe in the future,” the report warned.

Aside from exposure to climate-related perils, the susceptibility of cities in developing economies also include the sensitivity of their populations, and the poor competence of the governments to support local adaptation measures to fight the probable effects of climate change, said Maplecroft.

Given strong economic growth exceeding 5 percent in the coming years for countries such as the Philippines, Vietnam, Indonesia and India, the relevance of climate change to populations and business in key commercial areas should not be overlooked, the report stated.

“As global corporations expand into the emerging growth markets, their operations and supply chains will become exposed to a complex set of climate risks that have the potential to disrupt business continuity,” said Maplecroft’s head of maps and indices, Helen Hodge.

“It is essential for companies to identify where suppliers, assets and personnel are most at risk and plan for the long term,” she added.