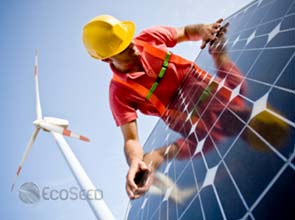 Europe added more solar energy instead of wind energy last year for the first time, with more solar photovoltaics were installed as the number of onshore wind projects numbers faltered.

From 7.3 gigawatts in 2009, about 13 GW of new PV capacity was added across the region last year – more than 70 percent of which coming from small and mid-sized solar systems – due to increased demand from residential customers, data from the European Photovoltaic Industry Association showed.

In comparison, an earlier report from the European Wind Energy Association published last month indicated that just 9.3 GW of wind capacity was installed last year, due to weakness in the onshore market.

Ingmar Wilhelm, E.P.I.A. president, is optimistic that solar energy will bloom, what with support for PV on the rise.

«Decreasing cost, new applications, strong investor interest and continued political support have contributed to this development, making PV the number one green technology in terms of capacity addition in Europe,” he said.

Despite planned cuts of PV feed-in tariffs in Europe, the sector managed to add the equivalent of two large coal-fired power stations to the market last year.

Germany, regardless of plans to cut solar feed-in tariff rates up to 15 percent last month, managed to add 6.5 GW to its existing capacity of 9.8GW, defending its title as the world’s PV leader for the second year in a row.

Also with plans to reduce feed-in tariffs, Italy and the Czech Republic both surpassed 1 GW of annual additions for the first time, followed by Belgium, France, and Spain.

The rest of the world pales in comparison with the accomplishments of Europe’s PV market. Non-European countries added a total of just 3 GW of PV last year, with Japan dishing out about 1 GW, followed by the United States and China.

Despite the huge PV potential in these Sunbelt countries, E.P.I.A. said that lack of political support held back the growth of their markets.

«Remarkable growth in the onshore wind markets of Romania, Poland and Bulgaria could not make up for the decline in new onshore installations in Spain, Germany and Britain,” said Christian Kjaer, chief executive of E.W.E.A.

E.W.E.A. forecasts continued strong growth next year. Between 1,000 and 1,500 MW of new offshore wind power capacity is expected to be fully-grid connected in Europe this year. Britain, Denmark and Belgium who led the strong development of the offshore wind market in 2010 could also lead the industry’s possible comeback this year.

A total of 19,000 MW of offshore wind capacity are awaiting construction. If it pushes through, E.W.E.A. said it would generate 66.6 terawatt hours of electricity in a normal wind year – enough to supply 14 of the largest capitals in Europe with electricity, including Paris, London and Berlin.