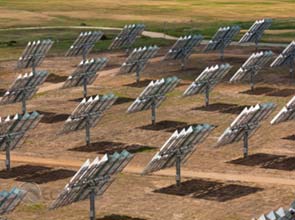 Israel-based Solaris Synergy installed its first live floating concentrated photovoltaic system this month. The system was connected to Israel Electric Coporation’s grid. The system is based at the Arava Institute for Environmental Studies Center for Renewable Energy and Energy Conservation in Kibbutz Ketura, 30 kilometers north of the Israeli resort town of Eilat.

The floating concentrating photovoltaic or F-CPV system is Solaris Synergy’s flagship product. It is designed to be a viable alternative to land-based solar energy systems as an answer to space constraints for solar panels.

The system features a modular design that supports power output ranging from several kilowatts to dozens of megawatts.

«This installation is a milestone for us, and we’re confident that it’s just the first of many future Solaris implementations in Israel and throughout the world,» said Solaris Synergy chief executive Yossi Fisher.

Last week, Eurekanetwork.org reported that Solaris, with French energy company EDF, is aiming to launch a similar floating solar power system named the Aquasun in Cadarache in the South East of France.

Each of the system’s modules reportedly produces a standard capacity of 200 kilowatts of electricity, with more power capable of being achieved by adding more modules to the system.

It will operate on-site for nine months as the system’s performance in seasonal changes and various water levels is assessed.