Floating tidal current turbines to be installed in Canadian waters 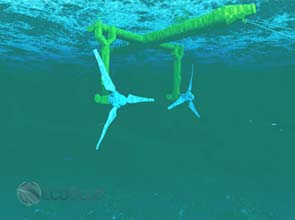 It is estimated that the turbines will be able to produce enough clean energy to meet the demands of 1,800 Nova Scotian households.

Under the project, M.C.T. and Bluewater have agreed to jointly develop a 2 megawatt floating tidal current turbine, called SeaGen F. The turbine will be the first of its kind to be installed in Canada’s Bay of Fundy, in cooperation with Nova Scotian project developer Minas Energy.

M.C.T. will impart its expertise in tidal current turbines; while Bluewater will contribute its know-how in the field of floating platforms and subsea moorings. Minas will be in charge of leasing the project site from Fundy Ocean Research Centre for Energy, or FORCE.

It is estimated that the turbines will be able to produce enough clean energy to meet the demands of 1,800 Nova Scotian households.

With a tidal range of up to 15 meters, current speeds reaching 5.5 meters per second, and with Nova Scotia’s feed-in-tariff, the project location makes it one of the most attractive economic sites in the world, according to M.C.T.

“We at Minas Energy are confident that our partnership with Siemens-Bluewater will set the stage for the emerging tidal industry in Nova Scotia. We will work with government, the public, and all other stakeholders to safely harness the abundant energy in this world-class resource,” said John Woods, vice president of Energy Development at Minas.

Currently, plans are under development to build-out a commercial multi-megawatt array at the tidal energy facilities of FORCE. – EcoSeed Staff