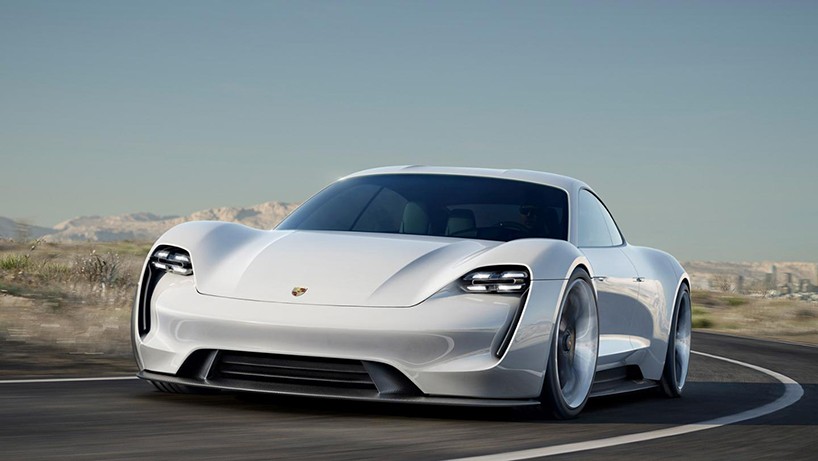 porsche introduced their first all electrically powered four seat sports car at the 2015 IAA in frankfurt. the ‘mission e’ concept car is a 800 volt drive system that pushes their performance to a more forward thinking practicality.

porscheintroduced their first all electrically powered four seat sports car at the 2015 IAA in frankfurt. the ‘mission e’ concept car is a 800 volt drive system that pushes their performance to a more forward thinking practicality. with over 600 hp and 500 km driving range, the ‘mission e’ hasan all wheel drive and all wheel steering. zero to 100 km/h acceleration in under 3.5 seconds and a charging time of around 15 minutes. the battery mounted in the car’s underbody, which is based on the latest lithium ion technology, runs the whole length between the front and rear axles. this distributes its weight to the two drive axles uniformly, resulting in exceptionally good balance.

a moveable body segment on the front left wing near the driver’s door gives access to the charging port for the charging system. the ‘mission e’ can be charged through its port, as well as, through convenient inductive charging by simply parking over a coil embedded in the floor of the garage from which the energy is transferred without cables to a coil on the car’s underbody. instruments are intuitively operated by eye tracking and gesture control, oriented toward the drive by automatically adjusting the displays to the driver’s position. race bucket seats serve for the four single seats, giving occupants secure lateral support during dynamic driving. between the front seats, the centre console is curved like a bridge with open space beneath it extending up to the dashboard. using cameras directed at the driver, detects eye tracking, and determine which instruments the driver is viewing. the driver can then activate the menu of the instruments in focus by pushing a button on the steering wheel and navigate in it, which also involves manual activation.

between the console levels there is a holographic display that extends far into the passenger’s side. it shows individually selectable apps, which are stacked in virtual space and arranged by priority with three dimensional effect. the desired symbols are activated by gestures that are detected by sensors. the much reduced sculpting of the front end shows a classic porsche sweepback, and relates the ‘mission e’ to the ‘918 spyder’ and porsche race cars. an advanced LED headlight matrix integrates with the air inlets. distinctive front wings and low cut bonnet references 911 design. the line of the side windows is also similar to classic porsches, but have two counter opening doors not found anywhere in their history. this enables convenient entry without a b-pillar. the porshce ‘mission e’ highlights a segment of the industry the germans really want to enter, but will find difficult with strong competition from tesla and other japanese car makers. this will result in a wide range of fully electric cars for everyone to drive. together the two motors produce over 600 hp the driver’s display is curved