Tesla revs up for expansion through $ 180 million I.P.O. 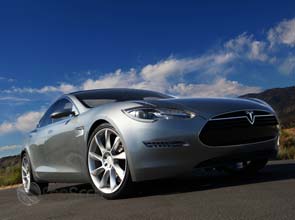 In less than a week, Tesla Motors Inc. will face the day of reckoning. The pioneering pure electric vehicle manufacturer wants to go down in history as the first of its kind to go public, but how successfully would only be determined by June 29.

The company has filed documents with the United States Securities and Exchange Commission to trade 11.1 million shares under the ticker symbol TSLA. With an offering price between $14 and $16 apiece, the offering could rake in nearly $180 million for Tesla.

Tesla wants to make a splash. After all it would be the first American carmaker to go public since Ford Motor Company did so in 1956.

It also has a flashy EV as its main product, the luxury sports car called the Roadster which can accelerate from zero to 60 miles per hour in less than four seconds.

And most recently it welcomed an iconic, though embattled, partner in Toyota Motors Corporation. Both companies will bring together a team of experts that will work on the development of electric vehicles, parts and production systems.

Tesla plans to use a part of the proceeds of the offering to purchase the $42 million Nummi manufacturing plant in Fremont, California which Toyota previously owned.

Tesla wants to build its electric Model S family sedan in the Nummi plant. The manufacturing facility’s massive capacity of producing 500,000 vehicles annually, or the equivalent of 1 percent of the total global car production, will supplement Tesla’s expansion plans.

«The new Tesla Factory will give us plenty of room to grow,» he continued.

Whether the novelty will make Tesla’s I.P.O. flourish is hard to tell as the company’s books reveal a different story, one of financial losses.

Tesla recorded $148 million in revenues, $246 million in losses and a total deficit of $290 million since the sale of the first Roadster in 2008, reported the Street.

In the first quarter of 2010, the company reported $20.8 million in revenues and $29.5 million in net losses. Simply put, Tesla has yet to earn profits from its investments.
In spite of the financial troubles, the company still received major investments from big players. In May 2009, Daimler A.G. (FWB:
DAI
, NYSE:DAI) acquired an equity stake of nearly 10 percent in Tesla, further strengthening a collaboration that began when the German automaker decided to integrate Tesla’s lithium-ion battery packs and charging electronics into the first 1,000 units of its electric smart vehicle.

Toyota (NYSE:
TM
, TYO:
7203
) has also agreed to purchase $50 million worth of Tesla’s stock at the public offering.

Tesla’s biggest ally may be the United States Department of Energy, which granted the company $465 million in low-cost loans to finance the production of its Model S sedan. The sedan is hyped to become the world’s first mass-produced electric vehicle and can supposedly run 160 miles to 300 miles on a single charge.

If plans push through, Tesla would start volume production of the Model S sedan in the Nummi manufacturing plant in 2012. The vehicle will come with a marked down price of nearly $50,000 to reach the automobile market’s more modest bracket.