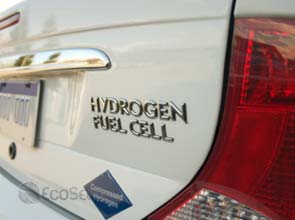 Chemical engineers at the University of Purdue in Indiana have developed a new process to generate and store hydrogen for fuel cells in cars without the use of a catalyst. The process, called hydrothermolysis, combines two hydrogen-generating methods – hydrolysis and thermolysis – and uses powdered ammonia borane, which contains 19.6 percent hydrogen, one of the highest in all solid materials.

Hydrolysis and thermolysis, on their own, are proven methods of extracting hydrogen, although scientists say they are not practical for use in vehicle applications.

Hydrolysis requires a catalyst to combine water with ammonia to generate hydrogen. However, many catalysts are not only costly; they can also be used only once.

Meanwhile, in thermolysis, the material must be heated to more than 170oC to release sufficient quantities of hydrogen. But since fuel cells in cars operate at only around 85oC, they do not generate enough heat to trigger the necessary reaction.

The new process also promises to harness waste heat from the fuel cells to run the hydrogen generation reactor, he added.

At optimum conditions, hydrothermolysis produces hydrogen amounting to about 14 percent of the total weight of the ammonia borane and water used – significantly higher than the hydrogen yields from other experimental systems.

«This is important because the U.S. Department of Energy has set a 2015 target of 5.5 weight percent hydrogen for hydrogen storage systems, meaning available hydrogen should be at least 5.5 percent of a system’s total weight,» Mr. Varma explained.

The researchers determined that a concentration of 77 percent ammonia borane is ideal for maximum hydrogen yield using the new process.

The team is exploring the possibility of scaling up the hydrogen generation reactor to the size required for a vehicle to drive 350 miles before refueling. Further research is necessary to develop recycling technologies for turning waste residues produced in hydrothermolysis back into ammonia borane.

The technology may also be used to produce hydrogen for fuel cells to recharge batteries in small electronic devices.

The team’s findings were presented during the International Symposium on Chemical Reaction Engineering in Philadelphia held on June 15. It was also detailed in a paper published online by the American Institute of Chemical Engineers.

The United States Department of Energy supported the hydrothermolysis research with a grant provided through the Energy Center in Purdue’s Discovery Park.