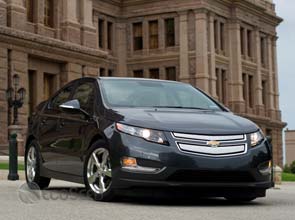 Chevrolet has officially entered the electric vehicle market by confirming that seven states, instead of three planned initially, will serve as launching sites of the company’s flagship E.V. called the Chevrolet Volt.

California, Michigan, Washington D.C., Connecticut, New Jersey, New York and Texas will be the first retail markets of its pioneer hybrid E.V. The company initially opted to launch the electric vehicle in the first three states.

The expansion of the launch markets is a show of faith in its car, company executives say.

«Chevrolet is extending the Volt launch to additional states because of strong customer interest and our confidence in all aspects of the vehicle and battery,» said Tony DiSalle, Volt marketing director.

«We can add markets as diverse as Texas and New York because the Chevrolet Volt can handle both urban commuting and longer trips, in Austin summers and Manhattan winters,” said Ed Whitacre, chairman and chief executive of Chevrolet’s parent company General Motors Company.

The company said that the car draws its power solely from a 16-kilowatt-hour lithium-ion battery for travels ranging 40 miles or less. For longer trips, the car uses an engine-generator that stretches driving range to approximately 300 miles on a full tank. It is reportedly capable of running 340 miles purely through electric power.

To make the Volt more appealing to the commercial market, the company has partnered with charging station developers to provide free home chargers in select regions. At the time of purchase, qualified Volt owners will be given a portable 120-volt charge cord, as well as an option to install a 240-volt charge station from the company.

In some cities, however, initial buyers of the electric vehicle will be eligible for one of 4,400 free home charging stations from ECOtality and Coulomb Technologies. Volt buyers who live in program cities may avail of a free 240-volt home charging station through the Coulomb or ECOtality programs, provided that they are willing to share their charging information.

The streets of California, New York, Texas and Washington D.C. can expect to see the Volt rolling on their asphalt in late 2010. Michigan, New Jersey and Connecticut could follow suit in the first quarter of 2011.

According to Chevrolet, the Volt will be made available to other states as soon as production volume increases by the vehicle’s second model year. The company aims to distribute the Volt in all of the country’s 50 states within 12 months to 18 months following initial launch.