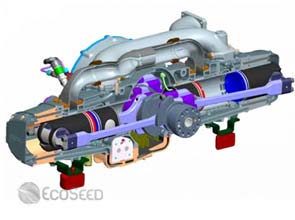 EcoMotors International received a huge boost for its revolutionary low-cost engine from two technology giants, after it acquired $23.5 million in a Series B funding round, reported the Detroit Free Press.

Venture capital firm Khosla Ventures and Microsoft chairman Bill Gates were the exclusive investors in the financing round. Both Mr. Gates and Vinod Khosla of Khosla Ventures were confident in the potential of the EcoMotors’ Opoc engine technology to penetrate the global market and lessen transportation emissions.

«The only truly disruptive technologies are those that can provide not only payback in months but also economic and carbon benefits to large segments of the world’s population without the need for subsidies or massive infrastructure investments,” said Mr. Khosla.

«The Opoc engine can be an important step in providing affordable, low-emission transportation for the developing world,» Mr. Gates added.

EcoMotors will use the funding to complete engineering and testing of its Opoc engine. The engine has two opposing cylinders with a crankshaft placed in between, while each cylinder contains two pistons that move in opposite directions.

The engine can be powered by different fuels, such as gasoline, diesel and ethanol, and has lower exhaust emissions than conventional models.

In May, EcoMotors agreed with Zhongding Holding Company Limited, one of the leading automotive component manufacturers in China, and Global Optima L.L.C., a Michigan-based engineering services company, to secure up to $18 million of engineering funding for the Opoc engine.

Global Optima also disclosed the possibility of a direct equity investment in the Michigan-based startup.

Furthermore, EcoMotors applied for a $200 million federal loan from the United States Department of Energy, which would allow the company to build its engines at an old General Motors manufacturing facility in Livonia, Michigan.

This latest funding support will accelerate the commercialization of the new engine technology. If development goes according to plan, the Opoc engine could be available in the market in two years to three years, said Don Runkle, chief executive of EcoMotors.