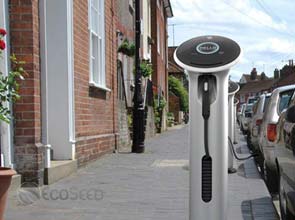 General Electric Company has introduced a new line of smart technology products following a major announcement that it is ready to invest as much as $200 million in new ideas on low-carbon applications, especially on smart grid designs.

The WattStation brings G.E. to the charging stations market while the Nucleus is being played up as a household device that will accompany smart meters expected to be ubiquitous in homes in the future. Both products will be available in the market in 2011. On Tuesday, G.E. (NYSE: GE) and four partner venture capital firms launched a $200 million challenge that seeks innovative ideas on smart grid development. G.E.’s WattStation and Nucleus are both directly related to smart grids.

The WattStation is billed as a user-friendly electric vehicle charger that cuts charging time by more than 50 percent.

G.E. said a full-cycle charge for a 24-kilowatt-hour battery would only last four hours to eight hours with its Wattstation, significantly shorter than the regular electric vehicle charging time ranging from 12 hours to 18 hours.

The WattStation is also engineered to make vehicle charging more efficient. The system is equipped with smart grid-enabled technology to help utilities monitor and manage the stress of charging electric vehicles on local and regional grids.

“Widespread electric vehicle adoption depends on having charging stations that integrate the need for quick charging with the personal need for easy functionality,” said Steve Fludder, vice president of the company’s ecomagination initiative.

G.E. will unveil a specialized home version of the charger later this year. G.E.’s product will compete with those of companies like Coulomb in the E.V. charging stations market.

The Nucleus is a smart meter companion in the household. G.E. said it will serve as a “command center” that will collect and save household consumption data.

A picture of the device in G.E.’s Web site shows that it is a white rectangular box with light indicators that is plugged in to a standard household outlet.

G.E. expects that by 2012 United States utilities would have installed 40 million smart meters that would enable utilities to charge “time-of-use” rates for electricity throughout the day.

“With these new pricing plans, however, comes the need for innovative technologies to help consumers manage their usage,” G.E. said.

The Nucleus will inform consumers of their household electricity use and costs. This information can be accessed real-time through a personal computer or smart phone applications to help consumers keep track of and control their electric consumption. The device is the first product from the company’s Brillion line of smart home energy management solutions.

Nucleus is expected to be available for consumers in early 2011 at an estimated retail price of $149 to $199.