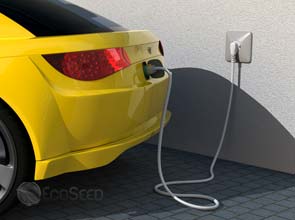 ECOtality  Inc. has teamed up with Michigan-based Roush Manufacturing to develop its flagship line of Blink electric vehicle charging stations.

Roush is currently manufacturing the tools needed to build the Blink prototypes and chargers, said Jonathan Read, president and chief executive of ECOtality.

“Never before has consumer demand been so high and the market potential large for E.V.’s. By introducing a new charger that is simply smarter and really connected, ECOtality and our partners are setting a new industry standard,” he continued.

A Pike Research study forecasts that the electric vehicle equipment supply industry will boom to $1.5 billion by 2015.

The Blink Level 2 charging stations will be available in two models: an in-home residential, wall-mount unit and a commercial stand-alone charger.

The models feature an interactive and networked touch screen that will allow drivers to pick the most convenient time to charge and to program the equipment to charge when rates are lowest, saving time and money.

“Blink is more than a place to plug in a car – it is the fulcrum between the driver, car, home and utility. This high level of interactivity built into our system sets Blink chargers apart from anything else on the market and is key to driving consumer E.V. adoption,” said Mr. Read.

The chargers can deliver a full charge in two hours to six hours and can be controlled through smart phone and web applications.

In addition, the chargers can be combined with smart grid systems, and their integrated communication capabilities will be a key component of utilities’ demand response solution.
California-based ECOtality (Nasdaq:
ECTY
) will install the first Blink charging stations later this year as part of its E.V. Project. The $230 million public-private initiative intends to deploy about 5,000 of Nissan’s zero-emission Leaf vehicle and 15,000 charging stations in 16 cities across the United States.