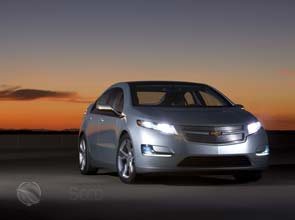 Strong public interest in the Chevrolet Volt has prompted General Motors to increase the production capacity of the electric vehicle in the United States by 50 percent.

The American automobile manufacturer will shore up the production capacity of the Volt from 30,000 units to 45,000 units in 2012.

The electric vehicle offers a total driving range of 340 miles per hour, during which the car draws its power solely from a 16 kilowatt-hour lithium ion-batter for travels ranging 40 miles or less. When the battery runs low, the Volt uses an engine-generator that extends the driving range to another 300 miles on a full tank.

G.M. has invested $700 million since 2008 to develop eight facilities in Michigan to produce the Chevrolet Volt. Among these facilities are a 33,000-square-foot battery systems lab in Warren; a battery-assembly factory in Brownstown Township; and supporting engine and stamping operations in Grand Blanc and Bay City.

The expansion of production capacity in the United States is the latest in a series of positive developments for the Chevrolet Volt. Recently, G.M. offered a comprehensive warranty for the vehicle’s advanced lithium-ion battery.

The eight-year, 100,000-mile battery warranty covers all 161 battery components, 95 percent of which are developed by G.M. The warranty will also cover the vehicle’s thermal management system, charging system and electric drive components.

G.M. also increased the number of launch markets for the Volt to include Texas, New York, New Jersey and Connecticut, in addition to California, Michigan and Washington D.C., to meet supposedly growing public clamor for its E.V.

The Volt will be available in California, New York, Texas and Washington D.C. in late 2010 and in Michigan, New Jersey and Connecticut in the first quarter of 2011.

The Volt will be sold at a suggested retail price of $41,000. Customers can join a lease program on the Volt, which will charge a monthly payment of at least $350 for 36 months.
Initial buyers of the vehicle will be eligible for one of the 4,400 free home charging stations from either ECOtality Inc. (Nasdaq:
ECTY
) or Coulumb Technologies, which will also include the cost of home installation.