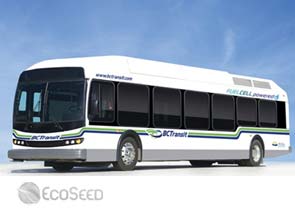 Ballard Power Systems was able to offset the poor performance of its fuel cell  business sector through a stronger showing of its other business segments, allowing the company to make $15.5 million in revenues in the second quarter.

This represented a 19 percent year-on-year increase from the company’s recorded revenues of $13.1 million in the second quarter of 2009.

Ballard Power’s fuel cell operations only brought in $3.2 million, a 34 percent drop from $6.4 million made in the comparable period last year. The company cited the shipments of hydrogen fuel cell hybrid buses to the B.C. Transit 2010 fuel cell bus program, which resulted in $6 million in revenues, as the primary reason for the increase in revenues last year.

Still, Ballard Power was able to deliver 651 units of its fuel cell products this quarter, marking a 46 percent year-on-year growth.

In addition, the company’s material products and contract automotive segments were able to contribute $3.6 million and $2.1 million respectively to Ballard Power’s overall revenues for the quarter.

Both segments generated $9.1 million in revenues, a 166 percent rise from the second quarter revenues in 2009. The growth was credited to increased volumes of carbon friction material products as well as higher shipments of light-duty automotive products, particularly for Daimler A.G.’s Highway 2/3 programs.

But sales from company’s fuel cell business also declined by 16 percent to $11.4 million in the first six months of the year. This was compensated by $6.5 million and $1.9 million earned by the material products and contract automotive segments, respectively. Revenues from these segments went up by 111 percent to $16 million from January to June.
Canada-based Ballard Power Systems (TSX:BLD; Nasdaq:BLDP) develops, manufactures and sales clean energy hydrogen fuel cells for a wide range of applications, such as fuel cell buses.