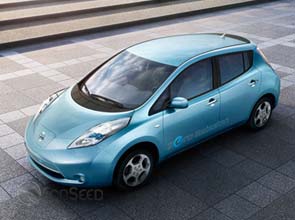 Hawaii will be one of the first markets that will see Nissan’s pure electric vehicle when it makes its commercial launch in January 2011 in the island state.

Nissan and Hawaii have agreed to build an electric vehicle charging infrastructure network across the state to boost E.V. deployment.

Nissan will guarantee a steady stream of the Leaf to the state and will work with dealers to ensure smooth selling and lease.

The Leaf is a five-door hatchback that can run for 100 miles on a single charge, supposedly exceeding the average driving requirement of over 90 percent of Americans. This range is enough to circle the whole island of Oahu, the third largest in Hawaii.

Nissan’s first pure E.V. can achieve a top speed of 90 miles per hour by drawing power from its advanced lithium-ion batteries.

The Nissan Leaf will be available in limited number and in select locations in the United States and Japan by December mainly through online reservations. Nissan said more than 18,000 customers have made a reservation for the Leaf. Full global rollout is scheduled in 2012.

«More than 90 percent of the fuel and energy we consume in Hawaii is the product of imported oil. Given our unique access to clean, renewable, energy sources, Hawaii should serve as a model of what is possible when government and business collaborate to plan a path forward into an energy efficient future,» said Senator Daniel Inouye of Hawaii.