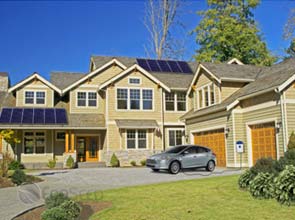 Ford Motor Company will use SunPower Corp.’s panels while marketing its solar-powered electric vehicle charging system that will fuel its new E.V. brands.

Customers signing up for Ford’s “Drive Green for Life” program can get the 2.5-kilowatt solar-powered charging station for under $10,000.

The system will use solar panels with 25-year warranties from SunPower. According to Ford and SunPower’s arrangement, the panels will be installed by SunPower’s dealers. The solar roof will come with a residential monitoring device that tracks the performance of the array and displays it on the Web or through an iPhone application.

It will produce an average of 3,000 kilowatt-hours of electricity a year, enough for a car owner who drives 1,000 miles per month, the companies said. The Focus has an average range of 100 miles.

Loans and leases to offset the upfront cost of the solar roof are also available for Ford’s customers, according to SunPower.

Ford plans to start selling the Focus this year and C-Max Energi in 2012.

The news marks the second time this year that Ford signed a partnership for its E.V. business.

In January, the company partnered with retailer Best Buy to sell a 240-volt home charging station also for the Focus and for future vehicles.

«The goal of working with both SunPower and Best Buy was to offer Focus Electric owners solutions to charging needs that help lower the vehicle’s overall cost of ownership,» said Mike Tinskey, Ford’s director of global vehicle electrification and infrastructure.

Ford’s competitor, General Motors, in July announced a program named the Chevrolet Green Zone program that will install large solar arrays at some of its offices and dealerships, including solar canopies that can charge G.M.’s Chevrolet Volt plug-in hybrids parked underneath.

It partnered with electric vehicle charger manufacturer ClipperCreek Inc. to provide high-speed chargers compatible with most electric cars and plug-in hybrids, including the Focus. The price of the whole system starts at a much lower $1,500.

SolarCity estimated that San Francisco residents spend on average $230 a month on gasoline if gas is $3.65 a gallon. Powered by electricity equal to a gallon of gas, charging an electric car from the grid cuts the cost to $107 if the power came from the grid.

This compares with charging an E.V. with solar energy costing just $54, the company said.