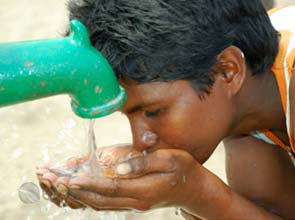 With the World Bank support, China will address the deteriorating water condition in the Turpan Basin in easternmost Xinjiang Uygur autonomous region.

India’s marine resource is said to be suffering from rapid urban industrialization, risking the health of about 63 million residents in low-elevation coastal areas.

The Xinjiang Turpan water conservation project is expected to reduce groundwater overdraft in the Turpan Basin while raising industrial and domestic water supply and farmers’ income from irrigated agriculture.

Around 600,000 people inhabit the Turpan Prefecture, where farmers traditionally rely on mountain rivers, or from the ancient Karez water systems for irrigation.

The area has been experiencing groundwater overexploitation caused by increased water consumption brought about by rapid economic growth in recent years.

The bank and the local government will execute water-saving approaches, such as evapotranspiration-based integrated water management system to assess, plan and allocate water for consumptive use.

The project will also employ other water saving methods such as construction and rehabilitation of the main canals, a switch from furrow to drip irrigation, land leveling, canal lining and improved drainage systems.

Also, a 2,000-year-old Karez water supply system will be restored to continue providing running water to the Turpan Basin.

Of the 1,237 ancient Karez systems that existed in 1957, only 300 still have running water. The disappearance of these water systems has led to the degradation of the oasis ecosystems in the Turpan Basin.