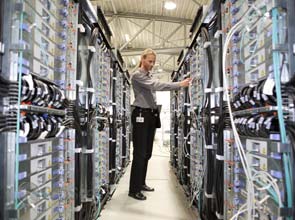 The list includes supercomputers from China, Germany and the United States that are used for various applications such as astronomy, climate prediction and pharmaceutical research.

The Green500 list, launched in 2008, puts a premium on energy efficient performance for sustainable computing against the backdrop of the emergence supercomputers that devour enormous amounts of power, as well as require huge cooling facilities for the considerable heat they produce.

Green500 defined the energy efficiency of supercomputers as millions of floating-point operations per second (Mflops) divided by watts.

The organization noted that accelerator-based supercomputers, which use dedicated hardware to perform computations faster than a traditional processor, control the top eight spots in the list.

“That makes the accelerator-based supercomputers on the Green500 more than three times more energy efficient than their non-accelerated counterparts on the list,” Mr. Feng noted.

Accelerator-based supercomputers are based on I.B.M.’s custom PowerXCell 8i processor or on the commodity graphics processing unit that may come from either Advanced Micro Devices’ ATI technology or from Nvidia.

Green500 said the most energy efficient supercomputers in the world are three QPACE systems that use I.B.M.’s PowerXCell 8i processor. It is the second time that Germany’s Julich Supercomputing Center, the University of Regensburg and the University of Wuppertalare were tied for the top place on the list for producing more than 773 Mflops per watt of energy.

I.B.M. systems that made it to the list include Blue Gene, System x iDataPlex, BladeCenter, power servers and hybrid clusters.
I.B.M. (NYSE:
IBM
) said their systems the most energy efficient and affordable by, allowing clients to achieve critical cost savings through reduced power consumption and cooling expenses.

The technology company claimed that systems based on its Blue Gene/P technology can realize energy savings amounting to over $1 million a year for being 40 percent more energy efficient than other supercomputers in the market.

I.B.M. also provided its iDataPlex-based cluster to Mississippi State University, which landed on the ninth spot in the list. Housed in the university’s High Performance Computing Collaboratory, the cluster is the university’s largest supercomputing resource and provides five times the performance of the previous cluster while consuming only half of the power.

“Our I.B.M. iDataPlex cluster will allow us to accelerate the university’s important research, including collaborations with government agencies and corporate entities, while minimizing our power and cooling costs and taking up less space,” said Trey Breckenridge, the university’s high performance computing resources and operations administrator.

The university operates the iDataPlex together with I.B.M.’s Rear Door Heat eXchanger to cool its entire data center. According to I.B.M., a client using three racks of the combined cluster and heat exchanger can save $16,000 in energy costs annually.