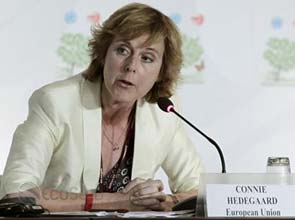 Climate Commissioner Connie Hedegaard is planning to reveal new research in July on the costs and benefits of deepening carbon emissions cuts to 30 percent by the end of this decade, from the current target of 20 percent.

Big polluters, such as the steel industry, oppose going further, saying the added costs will drive the industry overseas.

Ms. Hedegaard said the recent move away from nuclear power by several European countries, such as Germany and Italy, «had not made it easier» to increase climate ambitions. But there were also new opportunities.

«It seems many countries now understand that we could move beyond 20 percent by just delivering on our energy efficiency targets,» she told Reuters in an interview. «It seems that goes well with a lot of countries that would be normally be skeptical toward the 30 percent… which of course is interesting.»

Ms. Hedegaard’s report will be launched at an informal meeting of environment ministers in Poland on July 11. A similar report last year was strongly rebuffed by industry, but this version takes a detailed look at the individual case for each country.

«It is nearly there. It will confirm… that it is possible and doable to deliver on ambitious targets,» she said. «But the cost-efficient potential is spread very unevenly across the 27 member states.»

«For example, Bulgaria is the most energy-intensive country in Europe. There are relatively many low hanging fruit and relatively many cheap reductions to be made there, but of course you do not find a lot of money to invest in this in Bulgaria… How do we handle that challenge?»

«If you’re retrofitting buildings, you’re creating jobs that cannot be outsourced,» she said.

She also said the European Union should start looking at what to do about energy supplies beyond the 2020 horizon.

«If you are an investor, a pension fund for example, you are already now looking into the 2020s.»

«We should discuss – do we also need targets for renewable energy for 2030? That would send a strong signal to a growing industry in Europe and would take away some of the uncertainty.»

Ms. Hedegaard’s team is wrangling with the European Commission’s energy department to ensure that energy efficiency goals do not undermine the European Union’s carbon market – its main tool in the fight against climate change.

The Emissions Trading Scheme covers about 11,000 factories and power plants, forcing them to buy permits for each ton of carbon dioxide they emit, and pushing down their combined emissions with a steadily decreasing cap.

Experts warn that an overlying mandate for energy efficiency will reduce demand for permits – by about 400 million ton in 2013-2020, European Union sources say – leaving them in the market, and exerting downward pressure on prices.

One leaked study seen by Reuters foresees carbon prices cut in half.

Ms. Hedegaard welcomed the plan for energy savings targets, saying that in her previous job as Denmark’s environment minister a similar package of targets was «probably the most effective thing we ever did.»

But she added: «We have to create a correlation between the two different initiatives – at some point we have to push this issue further.»