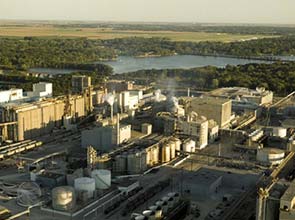 The Illinois Basin-Decatur carbon capture and storage project is supported by a $141 million stimulus funding from the Department of Energy through the Recovery and Reinvestment Act of 2009, and by another $66.5 million in private sector cost-share funds.

The project aims to confirm that carbon dioxide emissions can be stored permanently in deep underground rock formations.

According to the Environment and Protection Agency, geologic sequestration is the process of injecting carbon dioxide captured from an industrial – steel and cement production – or energy-related source – a power plant or natural gas processing facility – into deep subsurface rock formations for long-term storage.

It is the most common form of C.C.S., aside from ocean storage and mineral storage.

Findings from the project will also help determine whether geologic carbon sequestration can further improve the environmental footprint of alternative fuels like ethanol, by capturing and storing carbon emissions associated with their production.

The project will capture and store 1 million tons of carbon dioxide produced from the processing of corn into fuel-grade ethanol from the nearby Archer Daniels Midland biofuels plant every year.

«This first of its kind project will bring jobs to Illinois while advancing technology that the United States can sell around the world,» added Mr. Chu, referring to the estimated 260 jobs which will be created during construction and operation.

Capture and storage of carbon dioxide is expected to begin in 2013.

The Energy department selected the project in June 2010 as one of three to receive continued phase 2 funding.

The Illinois Basin-Decatur project is a member of the department’s Midwest Geological Sequestration Consortium, one of seven regional partnerships selected to determine the best approaches for capturing and storing carbon dioxide.