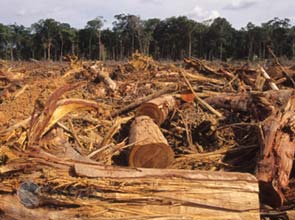 Preservation of rainforests and peatlands, which trap huge amounts of greenhouse gases, is seen as key to preventing dangerous climate change.

Another major Sinar Mas customer, Cargill Inc. has also said it will stop buying from the Indonesian firm if allegations of rainforest logging are proven.

In a report titled How Sinar Mas is Pulping the Planet, released on Tuesday, Greenpeace said it had confidential A.P.P. documents suggesting that the firm did not intend to fulfill a promise to source its wood from plantations alone after 2009.

«Pulping the Planet reveals from analysis of Indonesian government and confidential Sinar Mas maps and data, as well as on-the-ground investigations, that A.P.P. continues to acquire and destroy rainforest and peatland to feed its two pulp mills in Sumatra,» the environmental group said in the report, referring to once forest-clad western Indonesian island.

A.P.P’s sustainability spokeswoman, Aida Greenbury, told Reuters she was not aware of any plans to increase production to that level.

«To raise it to 17 million (metric) tons would require roughly 8 million hectares of area and that’s ridiculous,» she said by telephone. «I would like to see this confidential document and make sure it is not a fabrication.»

Smart’s president director, Daud Dharsono, urged its customers to await the results of an investigation into earlier Greenpeace accusations, by the Roundtable on Sustainable Palm Oil – an industry body of planters, consumers and green groups – which are expected in July.

«We have been in touch with all our customers on our sustainability practices and request that they continue to seek clarity directly with us should they have any concerns,» he said.