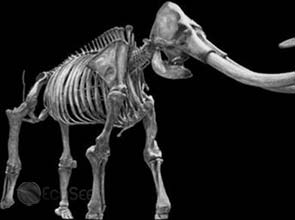 The demise of the leaf-chomping woolly mammoths contributed to a proliferation of dwarf birch trees in and around the Arctic, darkening a largely barren, reflective landscape and accelerating a rise in temperatures across the polar north, researchers at the Carnegie Institution for Science concluded.

The northward march of vegetation affected the climate because of the «albedo effect,» in which replacement of white snow and ice with darker land surfaces absorbs more sunlight and creates a self-repeating warming cycle, the study found.

The end of the last Ice Age, marked by a worldwide rise in temperatures and the dramatic retreat of glaciers that once covered much of the Northern Hemisphere, was already under way when the extinction of woolly mammoths began.

But the latest findings, scheduled to be published in the Geophysical Research Letters journal, suggest human activity played a role in altering earth’s climate long before mankind began burning coal and oil for energy, though the effects of prehistoric hunting were minute by comparison.

If mammoth hunters helped hasten Arctic warming, that would potentially be the first such human impact on climate, preceding that caused by ancient farmers, Chris Field, director of the Carnegie Institution’s Department of Global Ecology and a co-author of the study, said on Tuesday.

With the advent of agriculture about 7,000 years ago at more southern latitudes, humans are believed to have modified the climate through deforestation and cultivation of new plants, he said.

The flourishing of plant life as the voracious, vegetarian beasts were disappearing about 15,000 years ago helped warm the Arctic and boreal regions in what is now Siberia and North America by 0.2°C over a period of several centuries, though certain spots saw a temperature rise of up to 1°C, the study found.

Ancient human-caused warming was tiny compared to modern-day warming, in which the earth’s temperature has risen about 0.74°C (1.33°F) since the start of the 20th century, with temperatures rising at least twice as fast in the Arctic, according to the Intergovernmental Panel on Climate Change.

The research attributes about a fourth of the Arctic’s vegetation-driven warming to the decline of the woolly mammoth. If human hunters helped kill off the large mammals, they bear some responsibility for warming the climate, the scientists concluded.

«We’re not saying this was a big effect,» Mr. Field said. «The point of the paper isn’t that this is a big effect. But it’s a human effect.»

The study analyzed pollen records in sediments of lakes in Alaska, Siberia and Canada’s Yukon Territory. Through those records, scientists were able to reconstruct forest growth in what was once woolly mammoth habitat.

The scientists also analyzed behavior of African elephants, the modern analog to the woolly mammoth, which knock down trees as they dine on the leaves that they prefer to less-nutritious grasses.

The earth already was warming at the time when mammoths were disappearing, but there is evidence that dramatic growth of vegetation in the far North followed the large animals’ demise rather than preceded it, Mr. Field said.

«What we tried to do was say how much of the tree increase was due to the extinction of mammoths,» he said.

It was not possible, however, to quantify how much of the extinction was due to human hunting, he said. Whether hunters ultimately pushed mammoths over the brink remains a subject of scientific debate, he said.

If humans did kill off the mammoths, «I’m sure they didn’t have anything but a very local picture of what they were doing,» Mr. Field said.