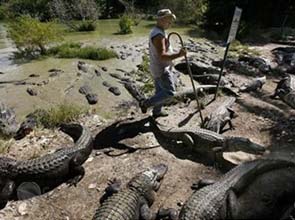 The wetlands’ water inflows have fallen by up to 60 percent and pollution has produced excess plant growth and a decline in marine species, the World Heritage Committee of the United Nations Education, Scientific and Cultural Organization said at a meeting in Brasilia.

Agricultural and urban development have been the main reasons for the decrease in water quality and flow.

It is the second time the Everglades National Park, a wetlands refuge for birds and reptiles and largest mangrove ecosystem in the Western Hemisphere, has been added to the List of World Heritage in Danger. The agency made the decision after a request from the United States.

The Everglades, known for its sawgrass prairies and alligators, were first declared an endangered site in 1993 following damage caused by Hurricane Andrew. The area was removed only in 2007.

«We commend the [United States’] request to re-inscribe the site on the danger list, and its plans for major infrastructure overhaul to restore the Everglade’s fragile wetland ecosystem,» Mariam Kenza Ali, a world heritage conservation officer at International Union for the Conservation of Nature, said in a statement.

Experts from Unesco and the I.U.C.N. are to visit the site and help develop a conservation plan.

The Everglades will likely be spared the feared impact of the Gulf of Mexico oil spill, United States government scientists said on Friday. No new oil has leaked from the well in 15 days and oil that is in the water will not travel as far as South Florida, the National Oceanic and Atmospheric Administration said.