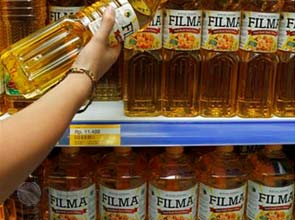 Both SMART, which is part of Singapore-listed Golden Agri-Resources, and leading critic Greenpeace claimed victory after the audit said SMART had not destroyed primary forest but had planted in greenhouse gas-rich peatlands.

The bitter dispute shows the difficulties for Indonesia of spurring economic growth and slashing emissions as the world’s top palm producer eyes hungry Asian consumers and ecoconscious Westerners for an oil used to make biscuits and biodiesel.

«This is a positive result for palm oil firms, especially SMART and Golden Agri, and I think this is going in the right direction for them to convince their E.U. buyers,» said Miang Chuen Koh, a Singapore-based plantation analyst at Morgan Stanley.

Greenpeace has said in a series of reports released since last year that the firm was clearing peatland and high conservation value forests, which shelter endangered species such as orangutans and trap vast amounts of climate-warming gases.

Unilever and Nestle dropped SMART as a supplier following the Greenpeace reports, while Cargill had threatened to do the same if the accusations proved correct in the audit SMART commissioned and paid for in response to Greenpeace claims.

A spokesman for SMART said he was confident the firm would win back Nestle and Unilever. SMART said the two firms represented 4 percent to 5 percent of its revenue.

Unilever on Tuesday welcomed the report but said the group needed to obtain certification from the Round Table on Sustainable Palm Oil – an industry body of planters, green groups and consumers – before Unilever would start buying from them again.

The auditors, Control Union Certification and BSI Group, were paid for by SMART, after being approved by the industry body.

The audit covered only 40 percent of SMART’s total planted area of 430,000 hectares, not including its plantations in Papua. It used satellite images, land surveys, soil analysis and interviews with officials for the findings.

«Planting on peatlands and deep peat were found but not as extensively as claimed,» the audit said, adding such planting was mainly incidental but broke Indonesian law and SMART’s own rules.

The firm’s share price was little changed after the audit, down 1.4 percent, though the stock has rallied 39 percent this year to beat strong gains in the Jakarta index, showing investors retain confidence in the firm’s outlook.

Greenpeace said in a statement that the audit showed SMART was illegally clearing deep peat and operating without permits, and it was now up to the Indonesian government to respond.

«SMART is not perfect,» its chief executive Daud Dharsono told reporters after the audit.

«It’s very difficult to detect deep peat plots that are small and sporadic,» adding the firm would repair damaged peatlands.

Peatlands release huge amounts of greenhouse gases when cleared or drained, and the deforestation of Indonesia’s extensive tropical forests led the World Bank to name it the world’s number three emitter in a 2007 report.

Indonesia has promised to cut greenhouse emissions by as much as 41 percent from business-as-usual levels by 2020 from curbing deforestation, but resource exports have driven its economy.

SMART told Reuters in an interview this month it will not be affected by the Greenpeace campaign or a planned two-year government moratorium on new permits to clear natural forest, and plans to expand its plantations this year.

SMART runs the Indonesia palm oil operations of Golden Agri-Resources controlled by the Widjaja family, whose business empire Sinar Mas has interests in pulp and paper, finance and property.