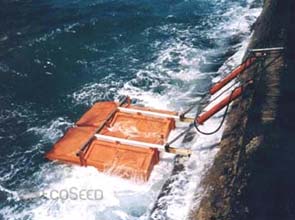 The wave power plant is an initial step in a planned 60-megawatt project on the Jaffa port’s breakwater in the northern Tel Aviv coast.

SDE’s system uses buoys set up on a breakwater that are moved up and down by the waves. The buoys’ movements generate hydraulic pressure, which is then transformed into electricity.

The device has about 10 percent of its system submerged in the waters while 90 percent of its body is on land. This lessens the system’s vulnerability to storms and other natural disasters, the company said.

The project is SDE’s ninth sea wave unit since it got support from the Ministry of Industry and Trade which enabled the company to set up eight models, the last of which was a 40-kW system.

SDE also revealed that an Israeli power utility is willing to buy the electricity generated from the project at 12 cents per kilowatt.

“In addition, SDE’s production cost per kilowatt is only 2 cents, compared to 3 cents from coal, 3.5 cents from natural gas, 12 cents from solar energy, and 3.6 cents from wind.”

The company is hoping other ports, such as those of Haifa, Herzeliyah and Ashdod, will allow them to deploy their technology on their breakwaters and other potential locations.

A recent study by Frost and Sullivan estimated that global wave energy resources can produce up to 6,000 terawatt-hours of clean energy every year, twice what nuclear power can.