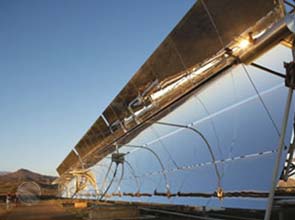 Securing the bureau’s official record of decision represents a critical point in the federal permitting process. It allows Solar Millennium to build and operate the 500-MW solar facility in Nye County, Nevada once it acquires all other federal, state and local permits.

With the federal approval in its possession, the company will now look for a Section 404 Dredge and Fill Permit from the United States Corps of Engineers. It will also seek other Nevada and local permits.

Construction of the solar facility is expected to begin at the end of 2011.

The proposed large-scale solar project will use solar thermal tracker technology. Arrays of parabolic troughs will follow the sun’s trajectory throughout the day and redirect solar radiation to a receiver tube. The latter contains a special fluid which heats up to extremely high temperatures. Once heated, the liquid is directed to a central power block where it flows through a heat exchanger. This initiates a process similar to the steam cycle of conventional power plants.

The facility is said to be capable of delivering enough electricity to meet the power demands of up to 150,000 homes each year.

“We expect that construction and operation of the Amargosa facility will be important to the renewed growth of Nevada’s state and local economies over the course of the next two to three years,” said Uwe Schmidt, executive chairman of Solar Millennium.

Throughout over three years of construction, the project is expected to produce approximately 1,300 direct jobs. Once it operates, it will open an additional 180 jobs.