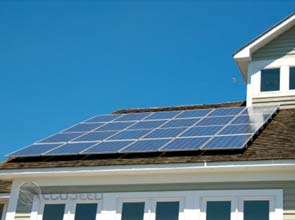 Developers set up 251.5 megawatts’ worth of PV systems in the period, compared with 152 MW a year earlier according to a report released by the Washington-based trade group and GTM Research.

The number of commercial and government solar PV projects grew by as much as 119 percent to 148 MW, accounting for 59 percent of installations. This compares with their 44 percent share in the same quarter last year through 67.3 MW worth of projects.

Residential PV accounted for 28 percent of new fittings. While only the remaining 13 percent came from utility-scale plants, the sector has contracted 886 MW of solar farms which are expected to come in 2011. Of this, 447 MW is already under construction according to the association.

The industry said lower component prices helped raise solar PV capacity. Wafer and cell prices in the quarter dropped by around 15 percent each, while module prices fell around 7 percent.

The report said prices for solar electric systems across the three market segments slightly fell. Prices for residential fittings fell 0.3 percent from an average of $6.42 per watt in the fourth quarter of 2010 to $6.40 per watt in the past quarter.

But installation volume also increased after developers rushed in the summer months of 2010 to meet a United States Treasury grant incentive program, which was expected to end by December 31 last year. The 1603 Treasury grant program, which reimburses 30 percent of the costs of building solar systems, was later extended in December until the end of 2011.

Meanwhile, a loan guarantee program from the Department of Energy is also set to expire by September 30 this year. Under the Section 1705 loan program, the government promises to pay back loans if borrowers default.

The program also has offered loan guarantees totaling $10.4 billion to 11 solar power plant projects that will deliver electricity to consumers in California and other south western states. It also offered $1.4 billion in loan guarantees to companies building solar panel factories, according to the United States Department of Energy.

California remains the country’s largest market. The state managed to increase its share in national accounting from 38 percent to 45 percent year-over-year at 112.3 MW. However, over the course of 2011, the report predicts installations will shift away from the state.

The association said the United States’ solar market has slowly been diversifying in the past five years. California, which comprised around 80 percent of total installations in 2005 accounted for less than 30 percent in 2010.

The association named New Jersey as the country’s strongest state for the quarter. The state managed to install 41.6 MW, up 49 percent from last year.

The report said New Jersey has primarily become a place for commercial and government projects over 100 kilowatts and over the past few quarters has been seeing larger projects over 1 MW.

Installed capacity in the top seven states, including Arizona, Pennsylvania, Colorado, New York and Massachusetts, accounted for 88 percent of all new capacity in the first quarter, up from 81 percent, “implying that the leading markets have been gaining even more share,” the report noted.

"On the whole, the U.S. is currently the PV industry's most attractive and stable growth market," said Shayle Kann, managing director of Solar at GTM Research.

In 2010, the United States installed 887 MW in PV, representing 104 percent growth over the 435 MW installed in 2009. Despite this, its market share of global installations fell from 6 percent in 2009 to 5.1 percent last year due to even faster growth abroad.

The association said the country is in period when it could increase its stake in the global solar market, taking advantage of a slowdown in major European markets, particularly Italy and Germany. It noted that a number of local PV manufacturers and developers are already seeking opportunities in the country.

“Over the past six years, the U.S. has been growing at a relatively even pace with the global market; as a result, U.S. market share of global installations has consistently hovered between 5 percent and 7 percent since 2005. In 2011, however, this pattern is likely to end,” the association said.