Solar power could be leading source of electricity by 2050 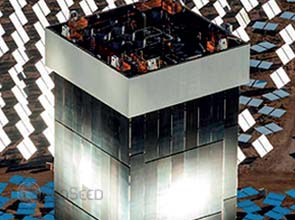 Solar power could overtake all other sources of electricity by 2050, according to two reports released by the International Energy Agency.

Based on the two documents released by I.E.A., solar photovoltaic systems could generate up to 16 percent of the world’s electricity by 2050, while solar thermal electricity from concentrating solar power plants could provide an additional 11 percent to the energy mix.

“The rapid cost decrease of photovoltaic modules and systems in the last few years has opened new perspectives for using solar energy as a major source of electricity in the coming years and decades,” said I.E.A. Executive Director Maria van der Hoeven.

“However, both technologies are very capital intensive: almost all expenditures are made upfront. Lowering the cost of capital is thus of primary importance for achieving the vision in these roadmaps,” added Ms. Van der Hoeven.

The I.E.A. executive director cautions that the reports do not represent a forecast, as they only detail the expected technology improvement targets and the policy actions required to achieve that vision by 2050, highlighting priority actions and milestones for governments, research, and industry stakeholders.

The findings of the in-depth documents of the I.E.A. regarding the potential of solar power were well received news for the environmental organization Greenpeace.

“Greenpeace welcomes the I.E.A.’s conclusion that solar energy will be the dominant form of power generation within 35 years. Following last week’s U.N Climate Summit (see related story), it is precisely the kind of good news that everyone concerned about climate change will want to hear,” said Sven Teske, senior energy expert for Greenpeace International.

“Wind and solar power will continue to dominate the renewable energy market as the cheapest ways of generating power,” Mr. Teske noted.

“Greenpeace calls on global energy policy makers to accept the reality of renewable energy and adapt the energy market accordingly. Phasing out fossil and nuclear fuels is an environmental and an economic necessity, and not a burden. The stellar economic performance of solar and wind power means that those who back coal-fired power plants seriously risk stranded investments,” he explained. – L. Polintan